THE STORY OF THE DIARY

The story of The Diary is remarkable.

In early 1946, a former SAS soldier tasked himself with one final mission.  The SAS had been disbanded and there were no plans to resurrect it.  The soldier’s self-appointed mission was simple: to find and preserve whatever documentation he could before the SAS was forgotten and its story lost for ever.

The soldier tracked down the Top Secret order authorising the first ever SAS operation; he sought out photographs of the original members of 1 SAS, including men lost on that first operation; he somehow acquired the after-action reports from the few who survived. 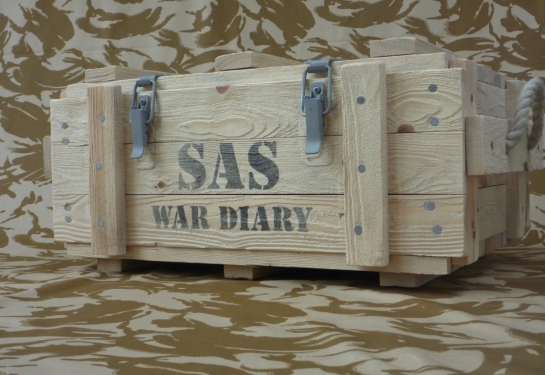 Then with more photographs, operational orders and reports (all Top Secret), and a handful of newspaper articles from Britain and even America, he traced the story of the SAS through North Africa, Sicily, Italy and France, on to the drive through Europe for Berlin, until the final march past when the SAS was stood down.

By mission end, the soldier had produced something unique – the first ever history of the SAS, collated by an SAS man.  Not only that, in the event of the SAS being consigned to a footnote in history, and with many of the documents he had copied either destroyed or lost forever, he had saved the story of the SAS during World War 2.

But the soldier did something else.  He collated his work in a single massive war diary, measuring 17” x 12” x 4” and weighing over 25 lbs, and bound it a in leather binder “liberated” from Nazi Germany. Without knowing it, the soldier had created an icon. Shortly before his death, he visited the SAS Regimental Association, and gave them … The SAS War Diary.

The Association locked The Diary away in its archives … and its existence remained a secret …. Until now. 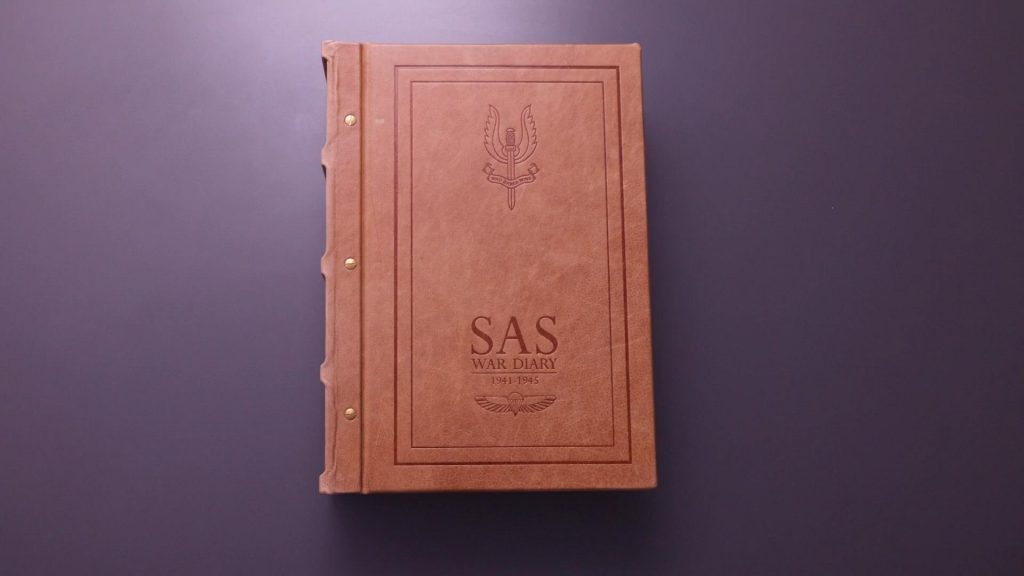 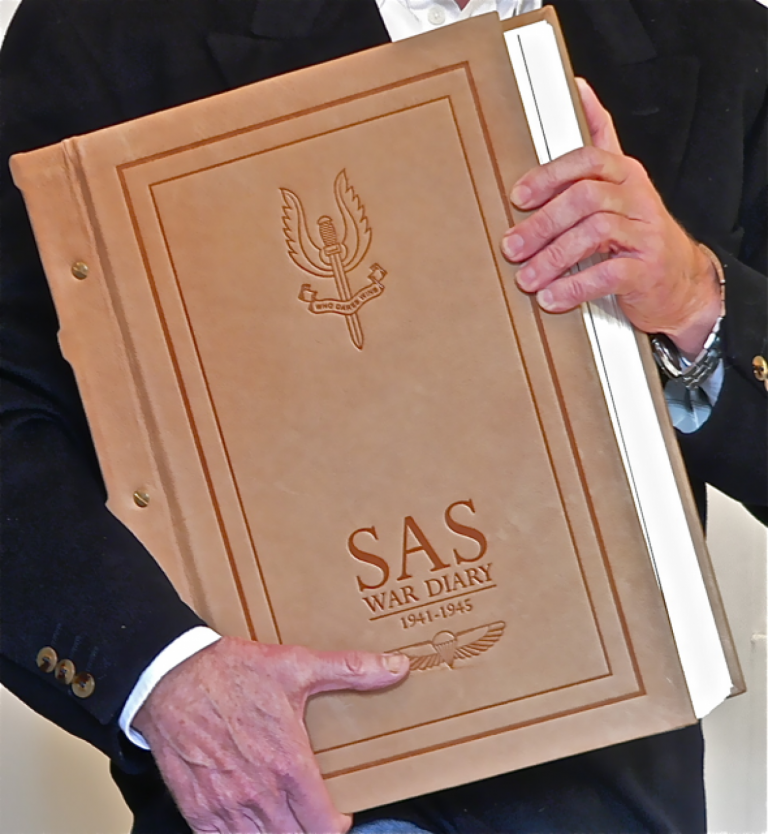 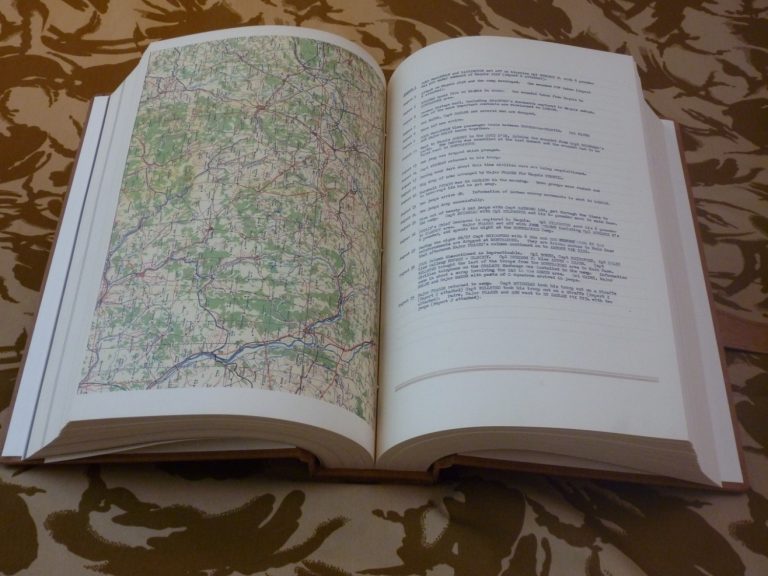 THE CONTENTS OF THE DIARY

Each copy of the SAS War Diary 1941-1945 replicates the original Diary, but with one important difference.  When the soldier collated his Diary in 1946, he used the first 281 pages to record the history of 1 SAS, and for some reason, perhaps aware there was another mission that might follow his; he retained the remaining pages but left them blank.

In the published editions, these pages are filled with specially cleared material from The Association’s own highly confidential archives to include the history of 2 SAS and an abridged history of the wartime SBS.  This completes the mission the soldier began at war’s end, and gives for the first time ever the full picture of the SAS in World War 2.

At the time, most of these documents were Top Secret – they include:

The actual order authorising the first ever SAS operation.

SRS operations in Sicily and Italy

1 SAS in France for D Day, NW Europe and Germany

Over 25 maps and 300 photographs, many of them taken on operations and behind-the-lines.

David Stirling’s personal confidential memorandum on how he created the SAS.

Secret correspondence discussing the future of Special Forces in the Middle East.

Top Secret correspondence between Stirling and Prime Minister Winston Churchill on the future and importance of the SAS. 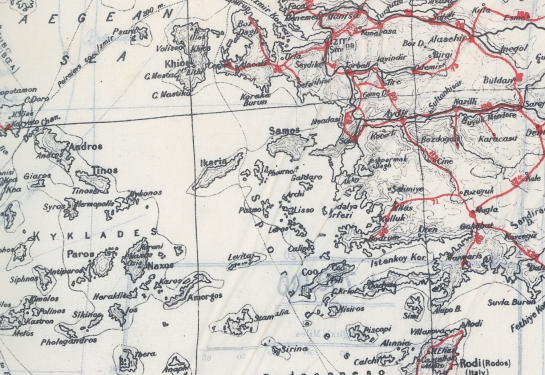 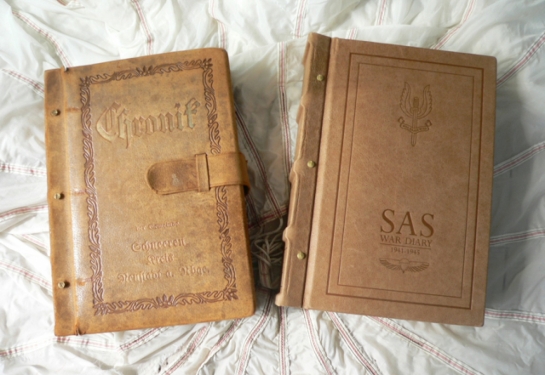 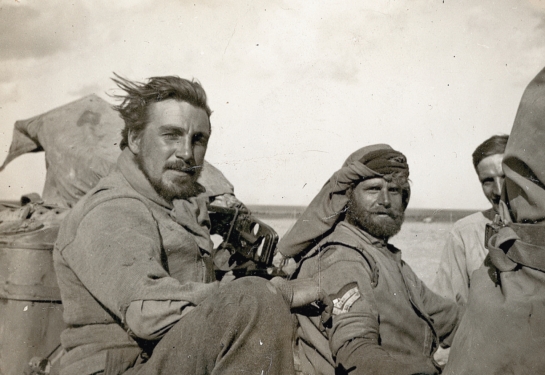 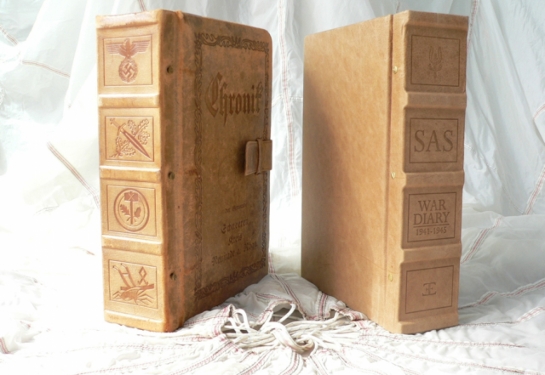 The SAS War Diary is released in a special limited Anniversary Edition to celebrate the 70th anniversary of the birth of the Special Air Service and to raise funds for the welfare work of the Regimental Association.

A strict limit of 3450 copies of the Anniversary Edition will be made available to the public. This is a worldwide release and will never be repeated. A further 1000 copies have been reserved for members of the Armed forces and the wider Services family as the Services Edition. In addition there are 550 Signed Editions for collectors and bibliophiles.

Based on the original Diary held by the Regimental Association, The SAS War Diary is augmented with material from their archive, very little of which has ever been seen before.

The SAS War Diary is extremely impressive, measuring some 17 x 12 x 4 inches and weighing over 28lbs. Each copy is bound by hand in full leather over wood composite boards in the style of the original, with three brass posts and finished with a new blocking design featuring the Regimental badge and wings.

The individual copies are then numbered and the limitation page is embossed with the seal of the Regimental Association, as are the signature pages on the signed copies. 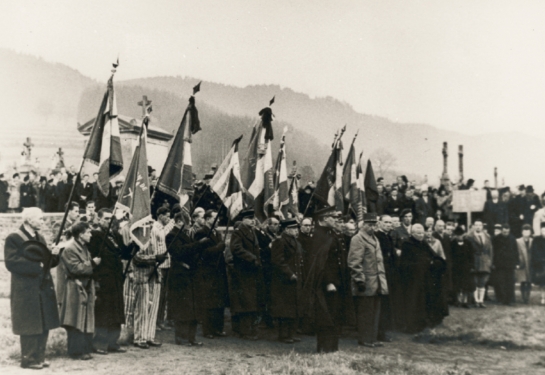 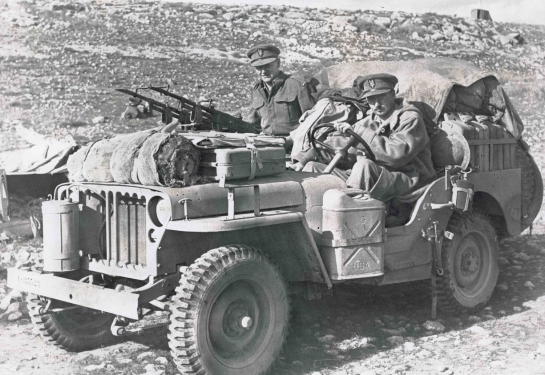 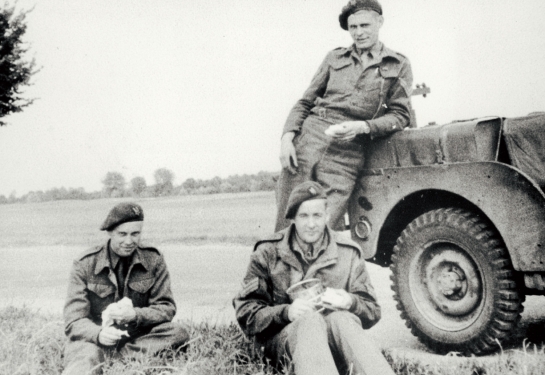 At the behest of the SAS Regimental Association 1000 copies of the SAS War Diary have been reserved for members of the Armed Forces and the wider Services family, military institutions and libraries, so that military personnel and historians worldwide can have access to the Regiment’s wartime history.

The Services Edition differs from the Anniversary Edition in that it contains an additional 24-page chapter detailing the immediate post war activity of the Regiment when, despite having been disbanded, the SAS ran a War Crimes Investigation Team.

In its way, and in the way of the Special Air Service, the SAS War Crimes Investigation Team is like the SAS War Diary itself.  For many years after the end of the Second World War it remained a secret – even within the SAS it self.

In August 1944, 2 SAS under Brian Franks dropped into the Vosges Mountains of Eastern France in Operation Loyton.  Their mission was to hold the mountain passes for the Allies to sweep through; it was scheduled to last days but the advancing American Third Army stalled.
Loyton dragged on for weeks; 2 SAS ran out of food, weapons and ammunition.  When 2 SAS pulled back through the lines, 31 men were missing.

In mid-1945, Franks ordered his intelligence unit, under Major E.A. “Bill” Barkworth, to discover the fate of the missing men and to bring those responsible to justice.  In October 1945, when the SAS was disbanded, Franks refused to renege on his promise to his missing men and, with the help of a remarkable individual, Prince Yurka Galitzine, defied the government and kept the unit going.

One centre of investigations was the village of Moussey, at the heart of Operation Loyton.  Today, in a lonely and isolated spot in a col above the valley, stands a memorial to the SAS men murdered there, erected by the people of Moussey – even though the village suffered horrifically at the hands of the Nazis because of the activities of the SAS there. The SAS still return to this place.

The Barkworth unit brought many of the guilty to the Nuremburg courts; it also helped the legendary Vera Atkins track down Nazis responsible for the torture and murder of SOE agents, most especially women agents.

The SAS War Crimes Investigation Team, and the last SAS soldier, finally came home in 1948 – three years after the SAS had been disbanded.

Please note that all the Signed Editions also have this additional chapter. 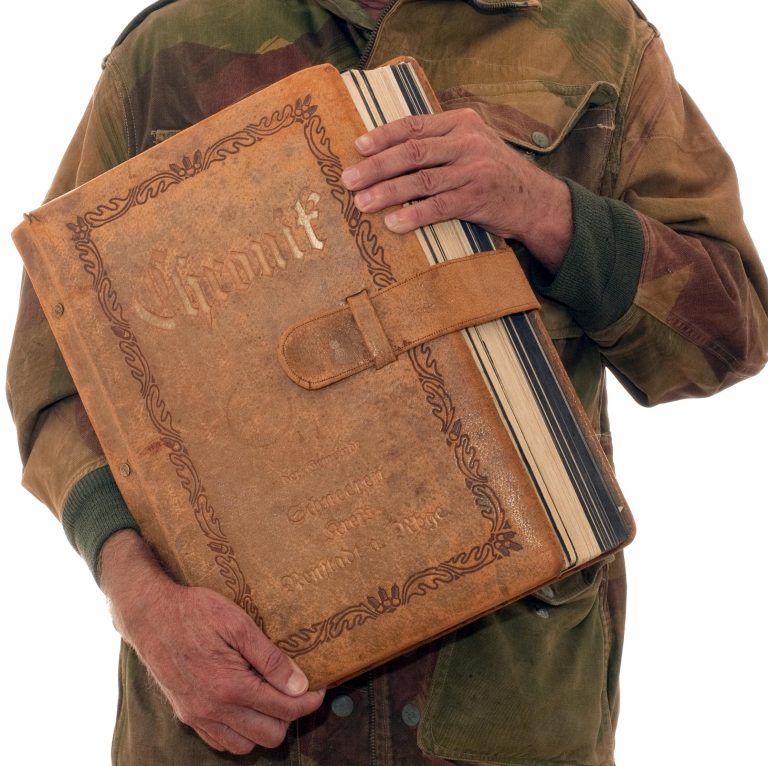 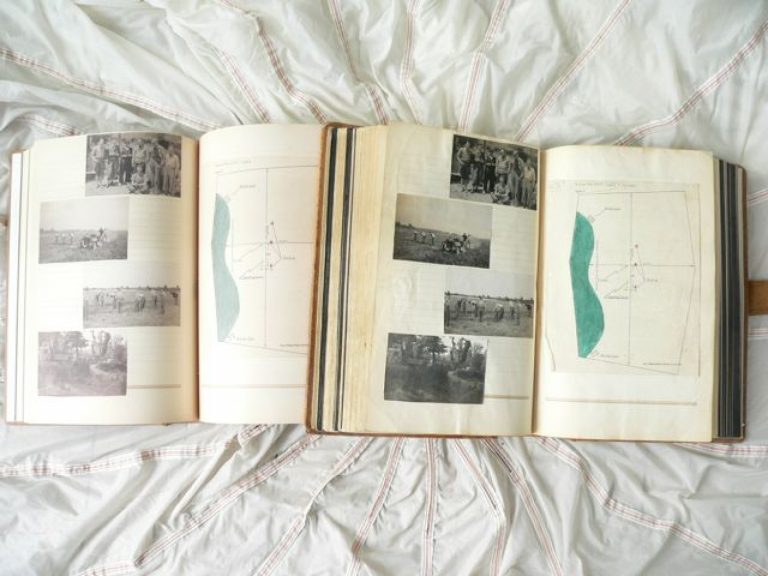 Signed by Sgt. Jimmy Storie the last surviving member of the “Originals”, those 22 men out of 65, who survived Operation Number One and who went on to become the backbone of the wartime SAS.

Bound over extra thick boards and with a leather closing flap replicating the one on the original Diary, this version comes in a sandblasted presentation “ammunition box” which converts to a lectern for reading and display purposes [illustrated] 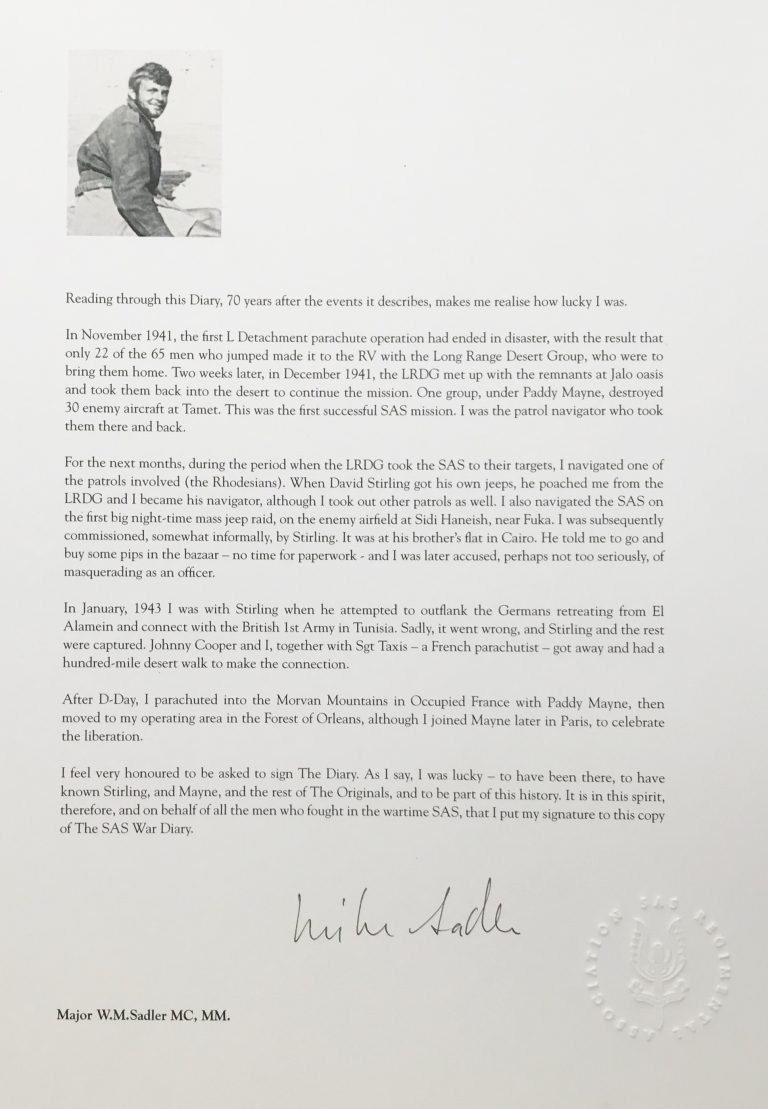 Mike Sadler was David Stirling’s navigator throughout his desert campaign.

Bound over extra thick boards and with a leather closing flap replicating the one on the original Diary. 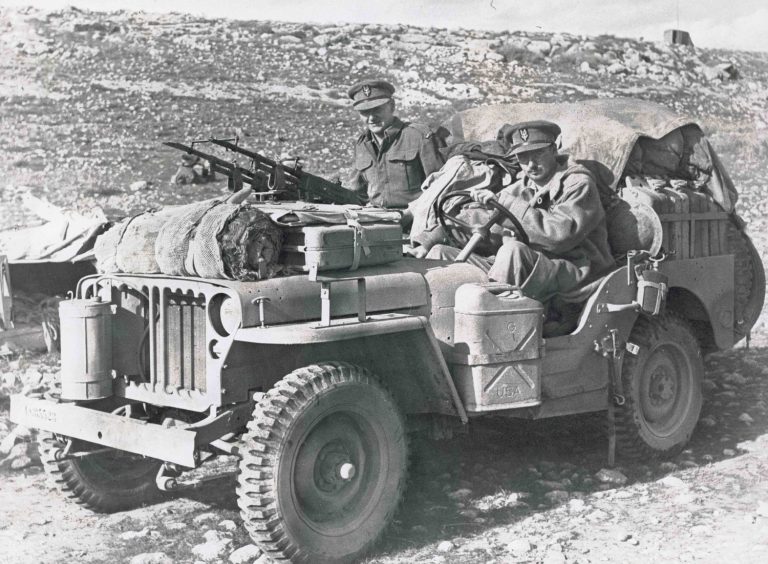 Signed by Major A.J. Schofield MBE, the longest serving member of the Regiment, who fought through occupied Europe with Paddy Mayne

Bound over extra thick boards and with a leather closing flap replicating the one on the original Diary. 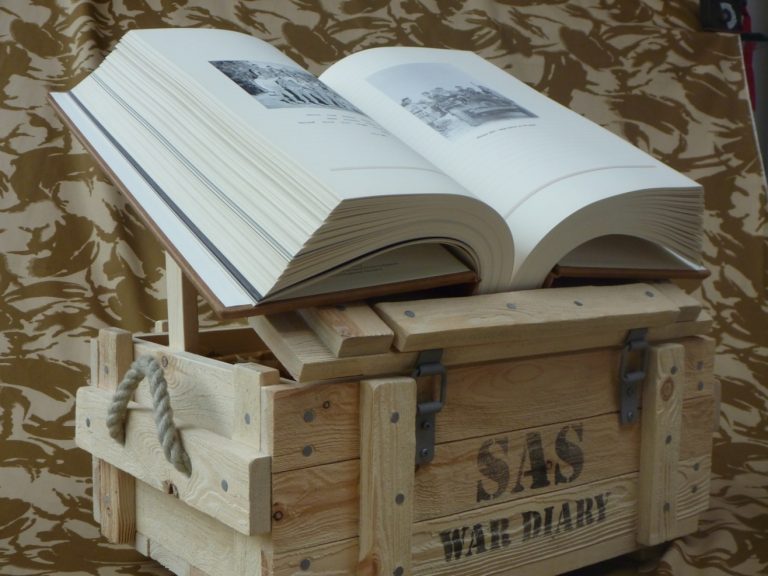 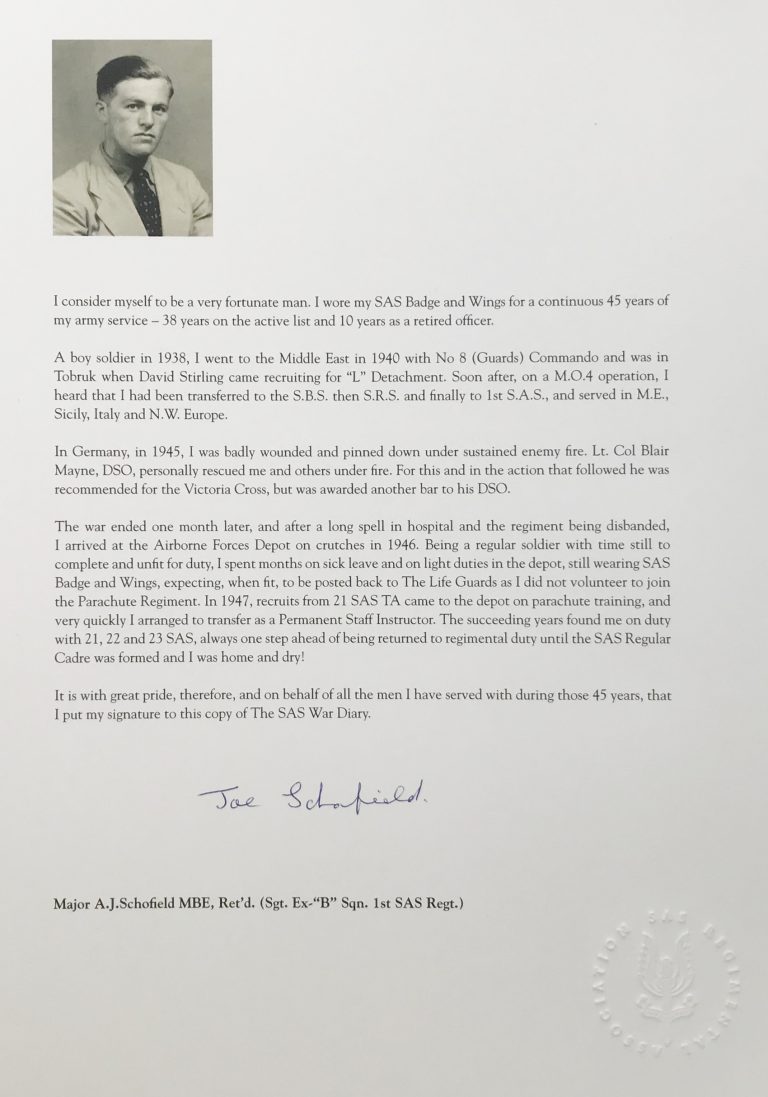 Bound over extra thick boards and with a leather closing flap replicating the one on the original Diary, this version comes in a sandblasted presentation “ammunition box” which converts to a lectern for reading and display purposes [illustrated] 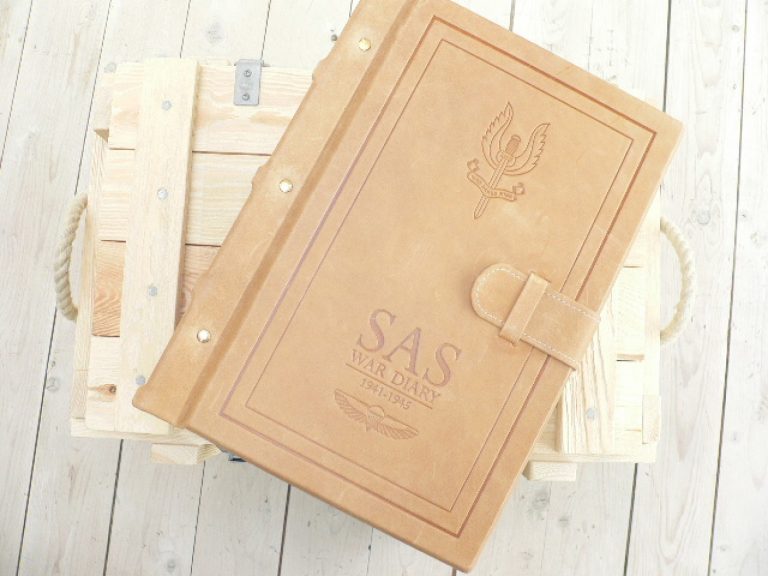 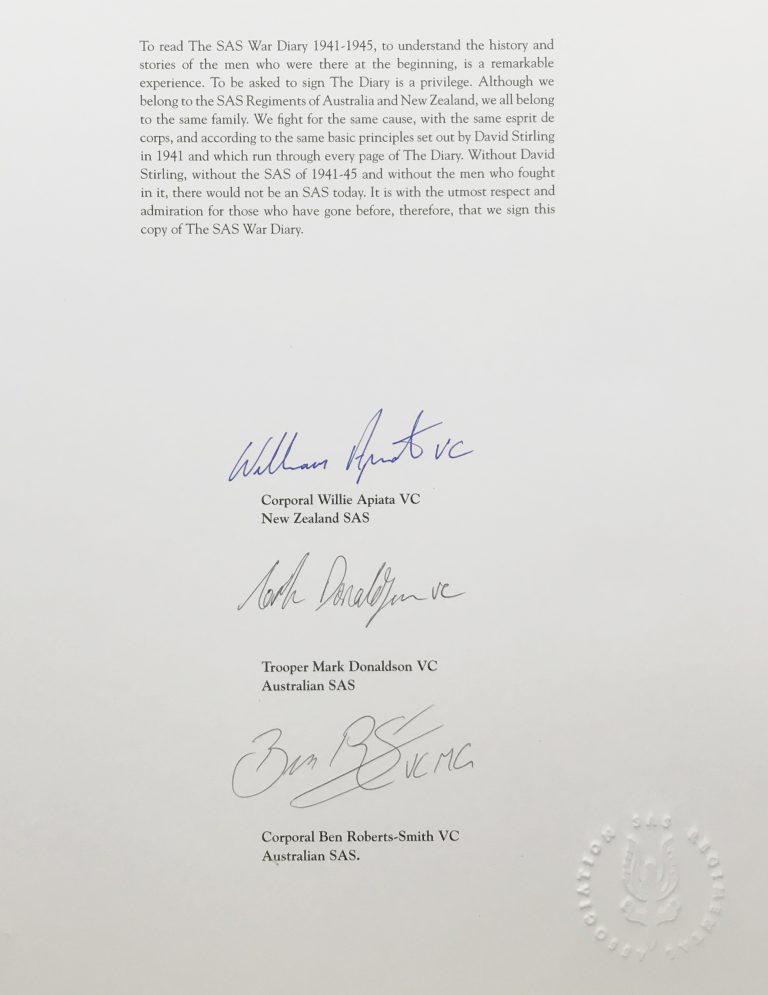 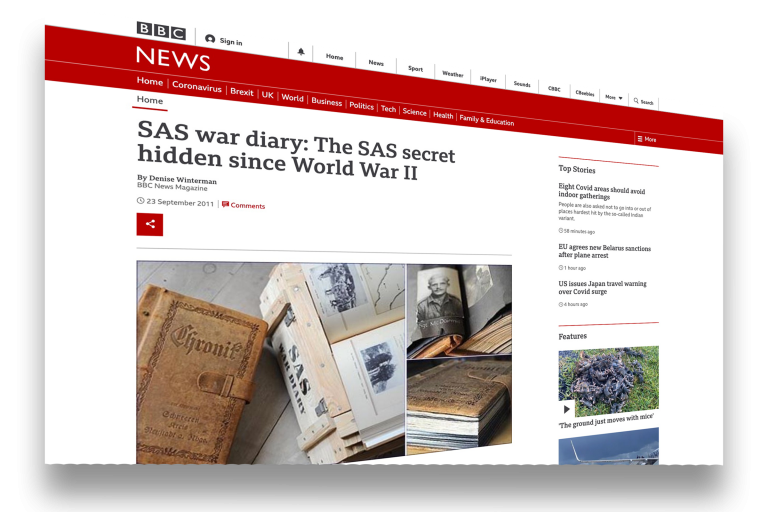 If your organisation would like to display the Diary and perhaps host a lecture please contact us on info@extraordinaryeditions.com

The diary is also be found at:

The National Library of Scotland

The SAS Regimental Association was founded in 1945.

The main aims and objects of the Association, are to promote the well-being of its members and their dependants and to maintain the Regiment’s traditions and esprit de corps. However the Association’s priority is, and always has been, welfare. Over the last few years we have paid out an average of £120,000 a year to members who, through no fault of their own, have found themselves needing help. No member or member’s widow or dependant is ever turned away, if the problem is a genuine one.

The Association’s Constitution states that one of our objects is ‘to relieve members or former members of the Regiment or their dependants who are in need by virtue of hardship, sickness or old age’.

At present they are able to fulfil this obligation; hopefully, with the support of our members and our friends, we will be able to continue to do so for many years.

A significant percentage of profits from The SAS WAR DIARY is going to the Association’s welfare fund, to assist in this work. 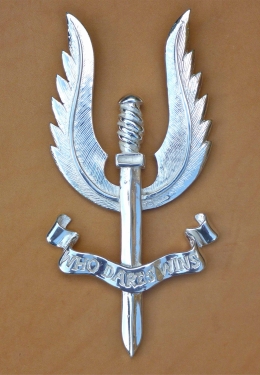